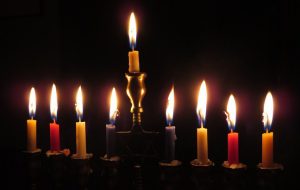 “Tenebrae” is Latin for “shadows” or “darkness.” The Office of Tenebrae is a tradition originating perhaps as early as the 7th century as a combination of the Divine Offices of Matins and Lauds for Holy Thursday, Good Friday, and Holy Saturday. By the late Middle Ages, their observance was anticipated on the evening of the previous day. Thus, for instance, Matins and Lauds for Holy Thursday would be recited on Wednesday night.

In Tenebrae’s traditional form, all of the lights of the church are dimmed, save for a triangular candle holder, called a hearse, with fifteen lit candles. What takes place is an extended, prayerful interaction between clergy, choir, and congregation, the choral plainchants and motets adding an air of mystery. The celebrant leads in a series of readings consisting mostly of passages from the Book of Lamentations and from psalms of lament such as Psalm 22 (“My God, my God, why have you forsaken me?”) After each reading, one candle is extinguished, gradually plunging the church into near-total darkness. At the close of the readings, the assembly creates a “strepitus” (great noise) by pounding on pews, stomping, and slamming books shut, the clamour representing the earthquake that followed Christ’s death. The last lit candle, the Christ candle, is taken away by the celebrant and hidden as all exit the church in silence.

Although still observed in some Orthodox, Lutheran, and Anglican churches, the Office of Tenebrae in the Roman Catholic Church is now defunct, the victim of some reforms undertaken by Pope Pius XII in 1955. As a devotional practice, however, it still survives in a number of Catholic cathedrals and parishes. (History of Tenebrae provided by SMCS alumnus Daniel Kelly) 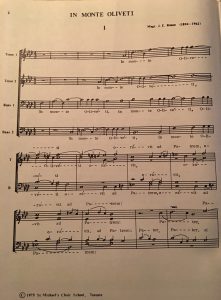 Monsignor John Edward Ronan set music to the first three responsories of each evening, and it is these nine responsories that are presented by the SMCS Alumni Choir each year. Responsories I -III belong to the Holy Thursday office, IV-VI to the Good Friday office and VII-IX to the Holy Saturday office. These compositions were written shortly after World War I for the St. Augustine’s Seminary choir, known as the “schola,” which came to St. Michael’s Cathedral in Toronto for three evenings each Holy Week to sing Tenebrae under the direction of Monsignor Ronan. These occasions, with the large choir of seminarians in their robes arrayed in the Cathedral sanctuary, and the dramatic ceremonial in the gradually darkening church, became beloved by generations of Toronto Catholics.

In those days, the readings from the Book of Lamentations were solemnly chanted to traditional plain-song melodies.

With the reform of the Holy Week Liturgy in the 1950’s, the practice of anticipating services was largely discontinued (except in cases of necessity), and Matins and Lauds were restored to the early morning hours.Following a subsequent revision of the texts of the Divine Office in 1974, Tenebrae ceased to exist as a liturgical rite.

Nevertheless, every year for more than 40 years, members of the SMCS Alumni Choir gather to sing these nine Responsories by Monsignor Ronan in services of readings, prayers, and hymns at select churches across the Greater Toronto Area. The tradition is also continued at St. Michael’s Cathedral in Toronto, by the changed voices of the boys of St. Michael’s Choir School and members of the alumni. These services have been given the name, “Tenebrae”. (excerpts from the liner notes of the recording, “Tenebrae” by the Victoria Scholars authored by Peter Bishop) 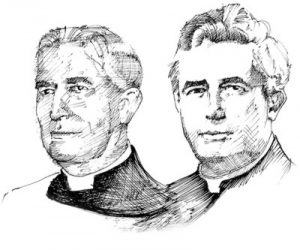 John Edward Ronan was born near the farming community of Colgan, Ontario, on October 28, 1894. After teaching at Loretto, Ontario, and then at the Brantford Institute for the Blind, he studied Law at the University of St. Michael’s College in Toronto. Following a serious illness, he resolved to become a priest, and entered St. Augustine’s Seminary in 1916. From that time, liturgical music became a major part of his life, and was to consume an ever-increasing portion of his energies. He studied in New York, at the Abbey of Solesmes in France, and at the Pontifical Institute of Sacred Music in Rome, Italy.

Quickly seeing a need for choral music for the Catholic Church in Canada, and in particular, for use at St. Michael’s Cathedral, Father Ronan turned his tremendous energies towards composition, and his legacy is enormous: he provided music for virtually every Sunday and major Feast day of the Liturgical year. The music he created was inspired by Gregorian chant, and he was rightly called an outstanding Gregorianist in the Solesmes tradition.

.When Father Ronan was named Protonotary Apostolic in 1962, the Apostolic Delegate to Canada, Archbishop Baggio, wrote to him as follows: “The contribution that you have made to Sacred Music and consequently to the Liturgy in Canada is absolutely inestimable. The cultural value alone would make it worthwhile; but ‘ars gratia artis’ is not enough for the Christian priest – it has to be ‘ad majorem Del gloriam.’ The consequences of this apostolate of yours will live forever – as I am convinced will your name and music – a glory to the Church and to Canada.” (excerpts from the liner notes of the recording, “Tenebrae” by the Victoria Scholars authored by Peter Bishop)

The above drawing of Monsignor John Edward Ronan is the artwork of 1996 SMCS alumnus, Vincent Hui.